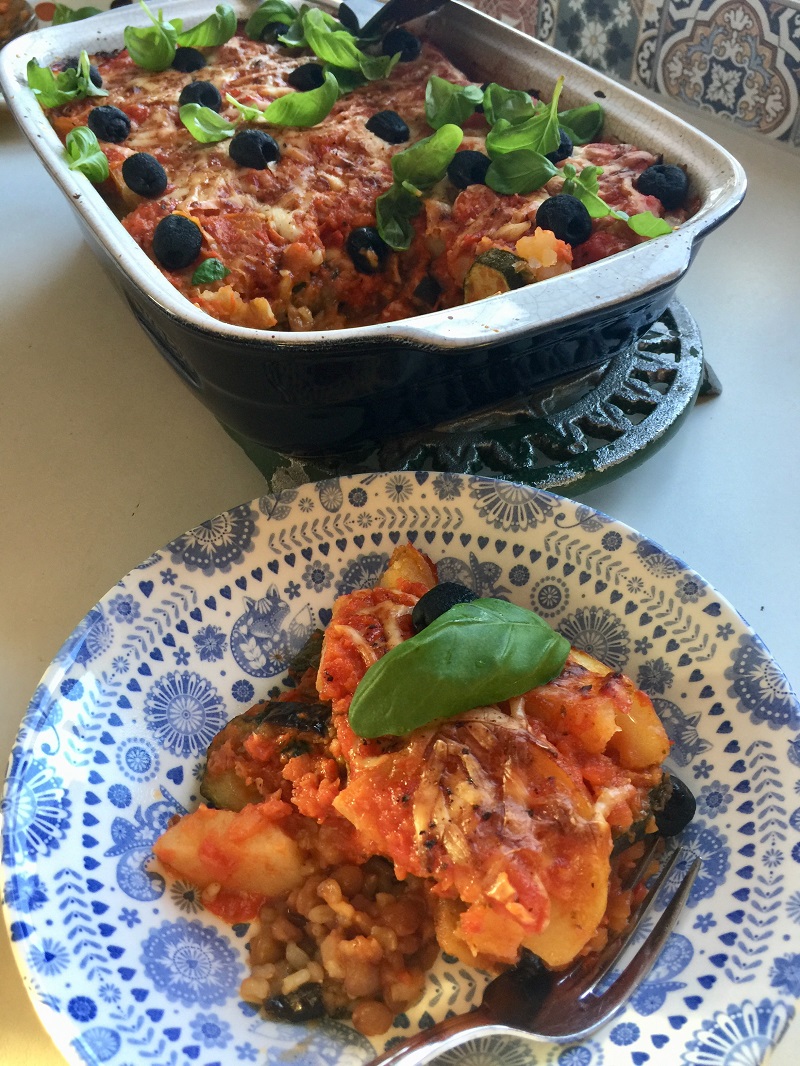 Posted at 16:07h in main course bakes by Liz 0 Comments

This pie is made with layers of roast aubergine, fried courgette and courgette and sliced potato on a bed of rice and lentils with a rich tomato and red pepper sauce between the layers. I’ve added goats cheese but leave out for a vegan version and serve on the side for those who would like cheese.
Nutritional info : Lots of antioxidants from the vegetables and tomatoes, protein and soluble fibre from the lentils and protein and calcium from the cheese and B vitamins, slow release carbohydrates and soluble fibre from the brown rice.

Pick the leaves from a basil plant

Place the rice and the lentils in the same saucepan with the bouillon and water. Bring to the boil, turn down to a simmer and put the lid on for about 30 minutes till cooked. Drain if necessary.
Place the slices of aubergine on an olive oiled baking tray and brush tops with olive oil. Bake in the oven till lightly browned and tender, approx 25 minutes, turning once.
Place the potatoes into a saucepan with  a lid and cover with water and add a tsp salt. Bring to the boil then simmer for 8 minutes. Drain and leave with the lid on until needed.
In a large frying pan, add a couple tbsp olive oil and fry the courgettes turning once until spotted with brown spots and set aside.
Make the sauce
Place the onion and pepper into a saucepan and gently fry together for 5 minutes in the olive oil, add the garlic, tomato paste and oregano and fry for a minute then add the tomatoes, breaking them up with a knife and stir in the sugar, salt and bouillon. Bring to the boil then simmer with lid on for  20 minutes.
Then using an immersion blender, pulse till sauce like but leave some texture.
Oil a large deep baking dish, cut the slices of aubergine and potato into halves.
Spread the rice and lentils in a layer over the bottom of the dish.
Place the aubergine halves over the rice/lentils in lines. Spoon over a third of the sauce.
Scatter over half of the basil leaves and half of the cheese.
Dot over the courgette slices and spoon over another third more sauce.
Place the potato slices in lines to cover the courgette layer. Spoon over the rest of the sauce and scatter over the rest of the cheese. Dot over the half the jar of drained olives pressing them into the sauce. (Serve the left over ones on the side).
Grind over some black pepper and bake for 35 minutes till browning and bubbling up at the sides.
Scatter the surface with the left over basil leaves.
Serve with a green salad. 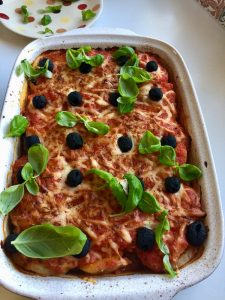